Roy Lichtenstein paintings for sale and sold – Agent4stars.com – The finer things in Life

Roy Fox Lichtenstein (pronounced /ˈlɪktənˌstaɪn/; October 27, 1923 – September 29, 1997) was an American pop artist. During the 1960s, along with Andy Warhol, Jasper Johns, and James Rosenquist among others, he became a leading figure in the new art movement. His work defined the basic premise of pop art through parody. Favoring the comic strip as his main inspiration, Lichtenstein produced hard-edged, precise compositions that documented while it parodied often in a tongue-in-cheek humorous manner. His work was heavily influenced by both popular advertising and the comic book style. He described pop art as “not ‘American’ painting but actually industrial painting”.His paintings were exhibited at the Leo Castelli Gallery in New York City. 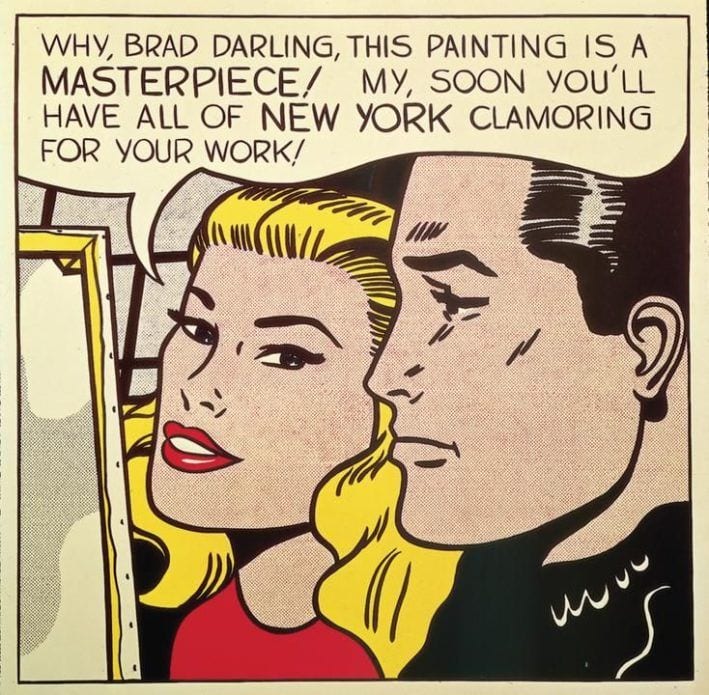 In January 2017, Agnes Gund sold the 1962 painting Masterpiece, which for years hung over the mantle of her Upper East Side apartment, for $165 million. The proceeds of the sale will be used to start a fund for criminal justice reform called the Art for Justice fund. The painting is currently one of the 15 highest prices ever to be paid for a piece of artwork.The purchaser was Steven A. Cohen

Roy Lichtenstein (1923-1997), Nurse, 1964. Oil and Magna on canvas. Signed and dated ‘rf Lichtenstein ’64’ (on the reverse). 48 x 48 in. (121.9 x 121.9 cm.) © Estate of Roy Lichtenstein.SOLD for $95.4 million, with fees, to another phone buyer, well above its $80 million estimate — despite the lack of a “speech” or “thought bubble” that typically drives up the price of Lichtenstein works. “Nurse” reached a new price level for Lichtenstein at auction. Christie’s also shared that guarantee with a third party.

‘Pop art is the art of today, and tomorrow, and all the future. All that other stuff — it’s old, it’s antique’

Whaam!  (above) and Drowning Girl (underneath) 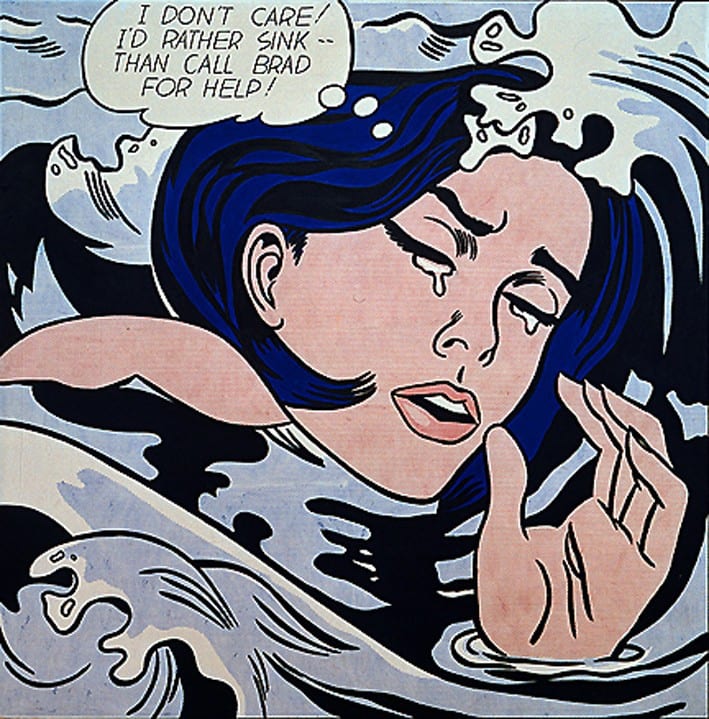 are generally regarded as Lichtenstein’s most famous works, with Oh, Jeff…I Love You, Too…But…arguably third. Drowning Girl, Whaam! and Look Mickey are regarded as his most influential works. Woman with Flowered Hat has held the record for highest Lichtenstein auction price since May 15, 2013

Roy Lichtenstein’s Woman with Flowered Hat sold for $56,123,750 on 15 May 2013, in Christies New York Post-War & Contemporary Evening Sale, becoming the most expensive Roy Lichtenstein ever sold. 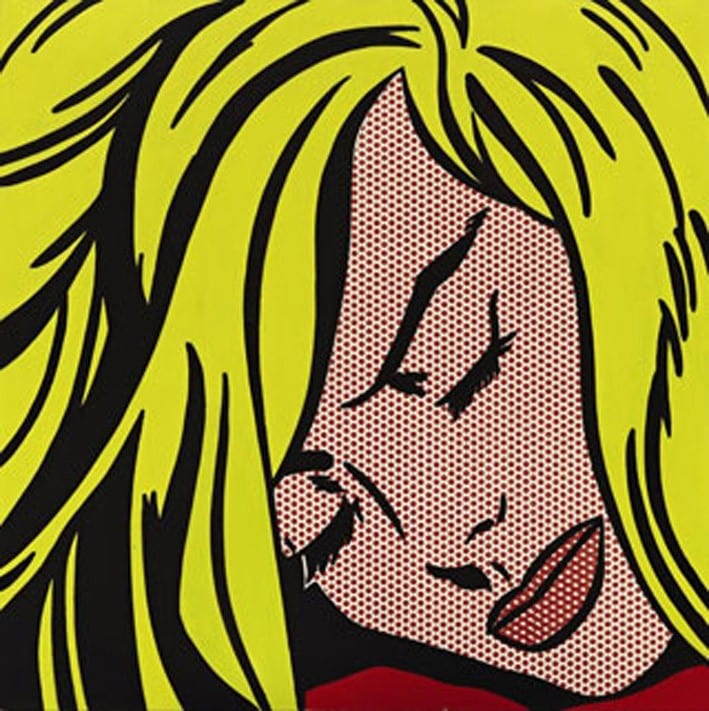 On May 9, 2012, the comic painting Sleeping Girl  (1964) from the collection of Beatrice and Phillip Gersh established a new Lichtenstein record $44.8 million at Sotheby’s. 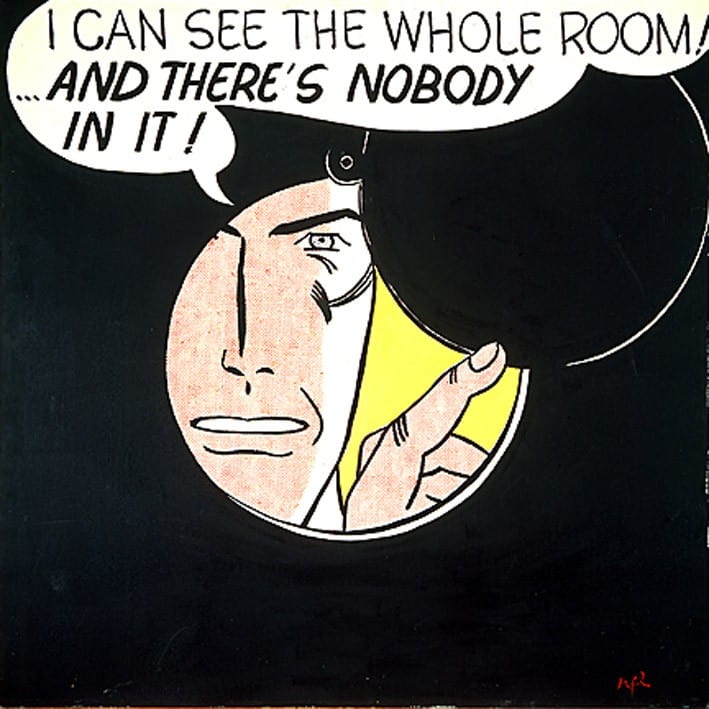 I Can See the Whole Room…and There’s Nobody in It! sold by collector Courtney Sale Ross for $43.2 million, double its estimate, at Christie’s in New York City in November 2011 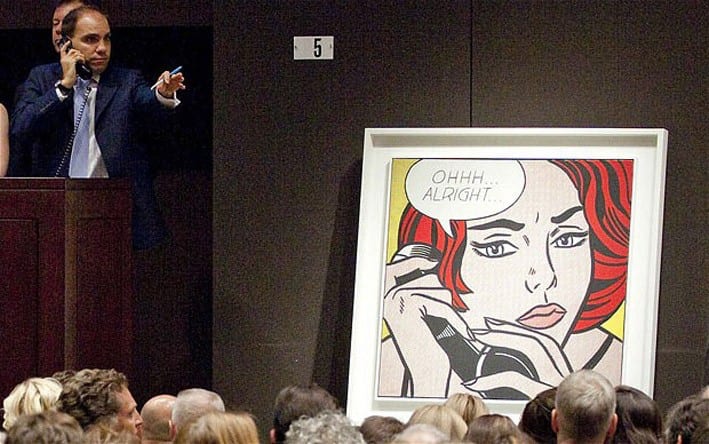 Documentary “The Life and Art of Roy Lichtenstein”

If you wish to buy or sell a art work by Roy Lichtenstein please use the contact form.

The most expensive Picasso paintings.Buy and sell Picasso Paintings.