The neutrino.We are looking at unlimited energy ! – Agent4stars.com – The finer things in Life 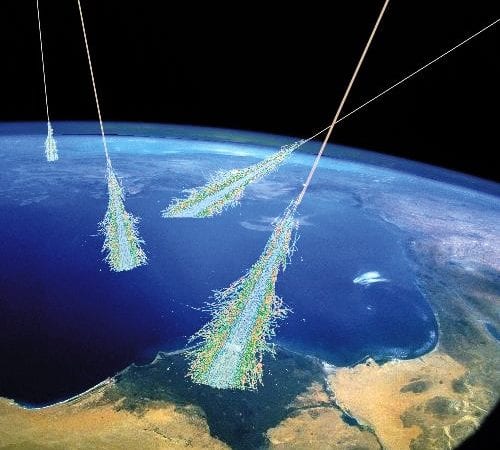 The neutrino packed energy of more than 2 quadrillion electron volts.

Every second, billions of neutrinos travelling at nearly the speed of light pass through Earth, but since these particles rarely, if ever, interact with matter, they are extremely hard to detect and study.

The Nobel prize in physics has been awarded to Takaaki Kajita and Arthur McDonald for discovering that elusive subatomic particles called neutrinos weigh something more than nothing.

Named after the Italian for “little neutral one”, neutrinos have no electric charge and were long thought to have zero mass, but Kajita at the University of Tokyo and McDonald at Queen’s University in Kingston, Canada, showed otherwise.

With two separate detectors built deep underground, one a kilometre beneath a mountain in Gifu prefecture, and the other 2km down an old nickel mine in Ontario, the scientists discovered that neutrinos can flip from one form to another as they hurtle through space – a chameleon-like behaviour that proves they have mass.

The Nobel committee said the discovery had “changed our understanding of the innermost workings of matter and can prove crucial to our view of the universe”.

Asked by reporters in a call following the Nobel announcement how it felt to have won the prize, McDonald described the discovery as a “eureka moment” and said: “It’s a very daunting experience needless to say. Fortunately, I have many colleagues as well who share this prize with me.”

Neutrinos are among the most abundant particles in the universe and thousands of billions of them pass through each of us every second of the day without us noticing. Many were forged in the big bang, but others are created constantly through radioactive decay inside the Earth, by exploding stars, and in nuclear processes that power the sun.

“Neutrinos are the fastest, lightest, most unsociable and least understood fundamental particles, and we are just now capable of detecting high-energy ones arriving from beyond our galaxy,” Roopesh Ojha, a Fermi team member at NASA’s Goddard Space Flight Center in Greenbelt, Maryland, said in the statement.

NASA said that the neutrino detected most likely originated in 10 billion light-years away in PKS B1424-418 — an “active” galaxy that’s classified as a gamma-ray “blazer.” An active galaxy, as opposed to its inactive counterpart, is one with a compact and unusually bright core.

Blazars, such as PKS B1424-418, one of these jets happens to point directly toward Earth, sending out a stream of high-energy neutrinos.

We are looking at unlimited energy !

Tags
The neutrino.We are looking at unlimited energy !