Artworks belonging to former Philippine first lady Imelda Marcos have been seized by authorities who claim they were acquired with stolen state funds.

A small number of works were taken away from properties owned by the 85-year-old on the order of the courts.

Pieces by Picasso, Gauguin and other masters are thought to be in the possession of the family of the country’s former dictator.

She is best known for amassing a huge collection of designer shoes during the family’s tenure in power, but has never been imprisoned despite being charged with a number of crimes.

State authorities claim that a selection of paintings were illicitly obtained using public funds during the Marcos era, which lasted from 1965 to his overthrow in 1986. Ferdinand Marcos died in exile three years later.

The family and associates are estimated to have amassed more than $10bn (£6.1bn) in property, jewellery, cash and other assets during their time in power. Mrs Marcos, who was elected to the Philippine congress in 2010, has consistently denied embezzlement. 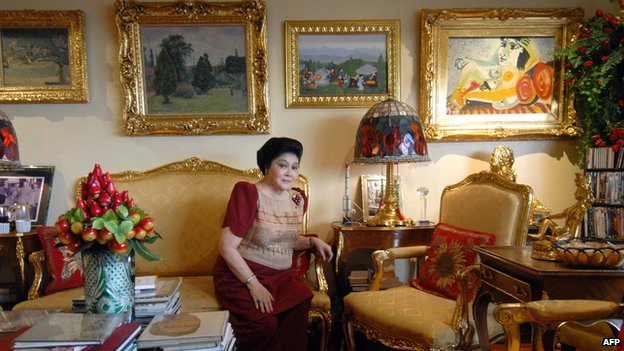 Mrs Marcos is pictured in her Manila apartment which is adorned with works of art
In a three-page court order, the sheriff’s office was authorized to go after eight paintings

The court ordered searches of all known offices and residences of the former first lady and Congresswoman Imelda Marcos in Manila and Ilocos Norte in a bid to recover the works of art.

Mrs Marcos is said to be a keen art collector, and her lawyer said that the court order and seizure were “highly  questionable” and there would be an appeal.

Robert Sison said that the paintings were not included in a forfeiture case which the Philippine government brought against the Marcos family more than a decade ago.

There are thought to be a total of 150 works of art in Mrs Marcos’s possession, which the authorities are keen to track down.

I want to learn from the best.Please see  a few of my Youtube videos and  add me on social links underneath.